Radio Laputa is a lo-fi documentary recorded and broadcasted on Malostranské náměstí, Prague on November 17th, 2014 during a student happening celebrating 25th anniversary of “Velvet Revolution” in former Czechoslovakia.
Small team of Handa Gote audio experts was asking passers-by about their memories from the revolution, or simply their feelings today towards the revolution, but lately falling into simple chitchating, introvert mumbling, soliloquy and just plain recording of whatever was happening around. Spoken word is recorded in four layers and combined with music from found cassettes, sometimes processed through simple sound effects.
The result is a somnambulant documentary about one insignificant meeting in the hour of the anniversary of one of the most important moments in the modern Czech history.

Recorded on location: Malostranské náměstí, Prague, Czech Republic
Everything battery powered.
All equipment used during recording was made before 17.11. 1989. 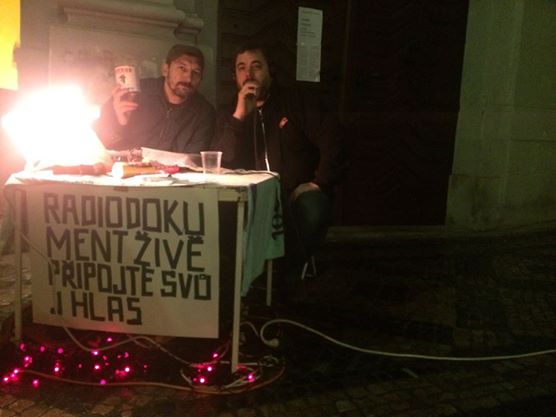